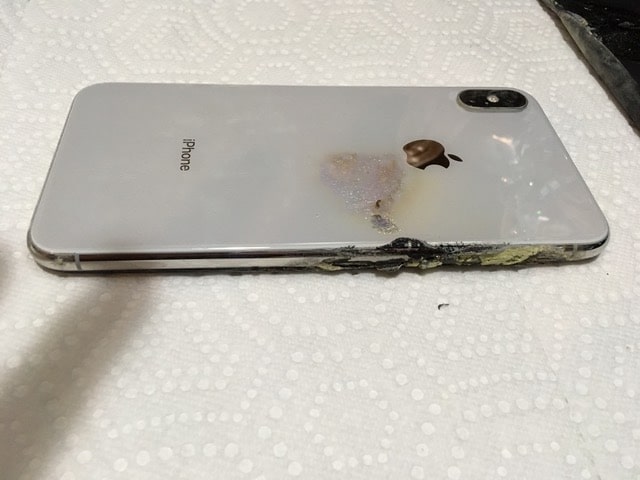 Josh Hillard from Ohio has claimed that his iPhone XS Max caught fire while it was in the pocket. This incident had taken place in  12th of December 2018.

The incident took place while the man was on a launch break. He first felt an excessive amount of heat on his rear pant pocket where the phone was placed. And a moment later he saw a green and yellow smoke coming out of his iPhone XS Max. Here is the story:

“Left no other option, I had to exit the room since there was a female in the break room with me and remove my pants. I ran to the boardroom where I got my shoes and pants off as fast as possible. A VP of our company put the fire out with a fire extinguisher because he heard me yelling.”

“Once the phone was extinguished, I was left with a hole in my pants, fire extinguisher on my pants/shoes, and some pain/irritation in my buttocks region where the pocket of my pants was located.”

“From the time of first noticing the fire and between removal of the pants and taking the phone out of my pocket and placing it outside, I inhaled A LOT of smoke. Later in the day, the team told me about the video that the office security camera captured.”

“Later in the evening, I went directly to the Apple Store with the burned/melted remains of the phone, case, and plastic screen protector. Once in the Apple Store, I went to the back and asked for a manager. I explained my story and the leader, she said that she would send a senior tech.”

After analyzing all these situations, Apple has offered the man with a new device but Hillard is not satisfied with Apple’s decision because he believes that it’s not the perfect solution. He is also seeking damages for his shoes and clothes, and also the compensation of his wireless service that he could not use because of the damaged phone.

Hillard seems to have lost faith with Apple and now going for legal action if his issue is not solved soon!