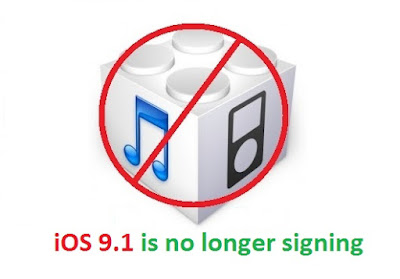 Apple is no longer signing the
iOS 9.1 software update for all compatible iPhone, iPad and iPod touch devices,
meaning that users can no longer downgrade to that version using iTunes. Apple
is now only signing iOS 9.2 upon restore. This means that you
basically are forced to upgrade to iOS 9.2 in all situation and cannot downgrade from iOS 9.2 to iOS 9.1.

Note: If you’re currently on iOS 9.0.2
or other jailbreakable firmware, be sure to stay there and don’t upgrade to iOS
9.2 or later until an iOS 9.2 jailbreak is released or an iOS 9.1 jailbreak is
released. If you want to restore your device, you can always use Cydia
Impactor from Cydia, a tool that lets you restore iOS and remain on the same firmware and
for this your device need to be jailbroken.
You can also visit this
link https://ipsw.me to
check the signing status of Apple firmware.
- Advertisement -