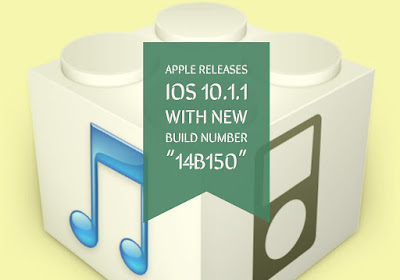 Apple has again
released a iOS 10.1.1 with new build 14B150 for the iPhone, iPad, and iPod
touch which is some sort of minor updates and bug fix.
Previously Apple
has released iOS 10.1.1 with build number 14B100 for iPhone, iPad and
iPod touch with some bug fixes for Health Data and various improvements for ‘Portrait’
depth of field camera mode for the iPhone 7 Plus.

Nov 12, 2019
Prev Next 1 of 484
The new build
version of iOS 10.1.1 is available via OTA(Over the Air) and those devices who
are already running iOS 10.1.1, the new build version software is not available
through over-the-air (OTA) update. So if want, you need to update it manually
with iTunes by downloading the ipsw firmware file from our download page.
iOS10news
Share

How to install iOS 10.2 on iPhone, iPad and iPod touch via…