Facebook
Twitter
Pinterest
ReddIt
Apple has also released iOS 10.2 beta 3 with
a build number 14C5077b introducing few new features with bug fixes and
enhancements like SOS feature, new TV App, new emoji, new wallpapers and some
changes in Apple Music where the Videos app has now been completely replaced by
Apple’s new TV App and
there is a new section in Settings for the app. You can prevent playback over
Cellular and default purchases to HD or SD. 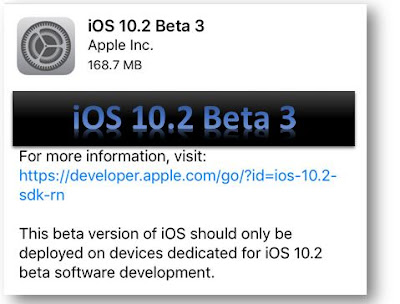 Along with that Apple also releases
first betas of watchOS 3.1.1 beta 3, and tvOS 10.1 beta 3 to developers.
iOS 10.2 beta 3 is available for registered
developer’s via OTA over-the-air on iPhone 7- 7 Plus and other compatible
devices like iPhone 6s-Plus, iPhone 6 – Plus-, iPhone 5-5C-5S-SE from iOS
settings app running previous beta or through Apple’s
online developer center and Apple Beta
Software Program.
And don’t forget to follow us on Social
Networks like Facebook, Twitter, Google+, or RSS for
more updates if you haven’t already.