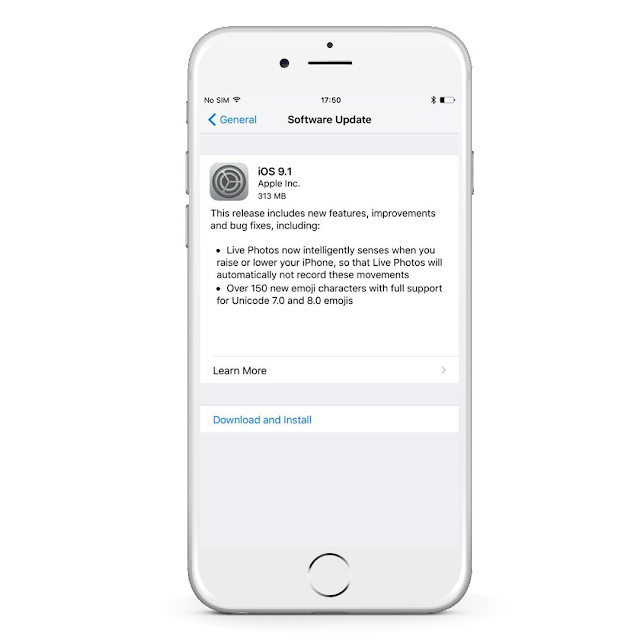 Apple has just released iOS 9.1 for iPhone, iPad and iPod touch. It is the first major update since iOS 9 was released in September. The software includes new emoji characters, Live Photos improvements, and the usual round of bug fixes.
Here’s the complete list of new features, improvements and bug fixes in iOS 9 below:
iOS 9.1 is compatible with the following devices:
iPhone 6s, iPhone 6s Plus, iPhone 6, iPhone 6 Plus, iPhone 5s, iPhone 5c, iPhone 5, iPhone 4S
iPad Air 2, iPad Air, iPad 4, iPad mini, iPad 3, iPad 2
iPad mini 4, iPad mini 3, Retina iPad mini (iPad mini 2), iPad mini
6th generation iPod touch, 5th generation iPod touch
Note: Jailbreakers should stay away from this update if they want to preserve their jailbreak, or the ability to do so as you may lose your jailbreak. Because we don’t know if the Pangu jailbreak tool, for iOS 9 – iOS 9.0.2 will work with iOS 9.1. Apple also patched several vulnerabilities in iOS 9.1, which includes two vulnerabilities used by Pangu team, so it won’t be possible to jailbreak iOS 9.1 using Pangu Jailbreak.
If you don’t care about jailbreaking, then you can install iOS 9.1 via OTA update by going to Settings > General > Software Update.
The size of the OTA update is 313 MB for iPhone 6s Plus, and may vary depending on your iOS device.
If you’re not getting the update via OTA update then you can munually update from iTuness by downloading the appropriate iOS 9.1 IPSW file for your device from the links provided below.