How to use your iPhone using one hand 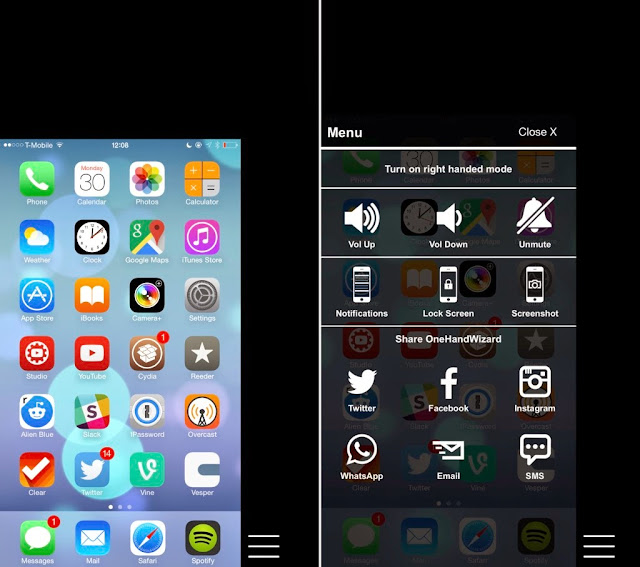 As we all know
about Reachability, the feature available on iPhone 6 & iPhone 6 plus
by default. Many of the users are having difficulties using with one hand instead
of both because of its larger screen size. But there is nothing to worry when we have a jailbreak. OneHandWizard is a
new jailbreak tweak that brings a true one hand mode to the iPhone. This tweak is especially if you’re using a large device like the iPhone 6 or iPhone 6 Plus.
Reachability feature on those devices with a solution of its own. Once
installed, double-tap on the Home button like you’d normally do to invoke
Reachability, and you’ll find the OneHandWizard interface instead.
Unlike
Reachability, OneHandWizard allows you to access the full interface of your
iPhone in a scaled down size. That means that you have access to all parts of
the screen, all app icons, and every corner of an app. OneHandWizard scales
down the interface to make it easier to reach and navigate with one hand.
OneHandWizard
is available for $3.99 via Cydia’s BigBoss repo.
This tweak is compatible
with iOS 8 or higher.
Installing Cydia Tweaks
To install the Cydia tweaks, simply open Cydia – Tap on Search and type the name of the Cydia tweak that you want to install and Tap install. That’s it!
Note: Respring your device every time you install new tweaks. The tweaks may not work properly if you do not respring or reboot your device.
These tweaks can be downloaded via BigBoss repo. Some may cost a couple of dollar and some are free.
1...767778Page 78 of 78