With the
release of iOS 9.2-9.3.3 Jailbreak, many users are facing problems while
installing packages and tweaks on their device. To fix all these issues, Saurik
has released an update to Cydia Substrate (version 0.9.6200) that brings
improved compatibility for Pangu’s Jailbreak of iOS 9.2-iOS 9.3.3. 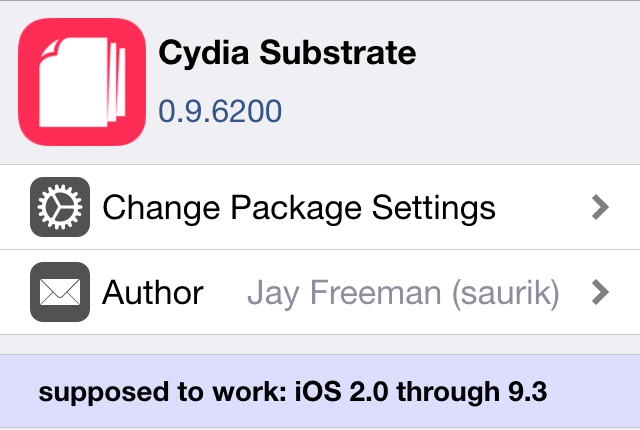 How to update
Cydia Substrate on Jailbroken iOS 9.2-9.3.3
* Go to Cydia
>> Changes tab and tap on Refresh button in top right corner.
* Once it is
refreshed, you can see Cydia Substrate under ‘Available Upgrades’.
* Just open >>
Tap on Modify and Update it.


What’s New:
Cydia Substrate 0.9.6200, on iOS 9.2+, “mitigates” :/ an issue of
storage on the root filesystem when using a “semi-untethered
jailbreak” (so far my favorite term for jailbreaks via an app vector) by
stashing the installation target of extensions.

It also fixes a bug in function hooking on all versions (though it should
rarely come up) and has some minor modifications for recent versions of iOS
(which should not cause problems on olders versions, but if that happens I want
to know as all versions are still supported by this package).

The “volume up to disable” feature has also been modified to work
correctly after the device has booted, which means you can now disable
Substrate on iOS 9.2+ by holding volume up while using the jailbreak app from
Pangu.

If your device
has not yet jailbroken then follow this simple tutorial on How to jailbreak iOS9.2-9.3.3 using Pangu and Jailbreak without computer.