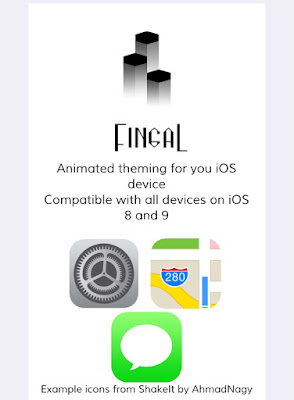 A brand new jailbreak tweak has been released in
Cydia which allows you to have nice animation effect on your homescreen stock
apps icons. The tweak name is Fingal which is developed by the Charlie Hewitt.
Fingal is simply animated theming for your iOS devices. This tweak is
beautifully awesome though it drains your battery but when you see at your
homescreen app icons animating with a nice style and iam sure you will love the
tweak and it might be your favourite tweak.

Oct 25, 2019
Prev Next 1 of 227
Fingal is available in Cydia via ModMyi Repo for
free of cost and is compatible with iOS 8 or later. After installing this tweak
you can have option to configure from the settings panel. You can enable or disable basic example theme inside it, more themes will be available in the coming
updates.
Note: Respring your device to get full functional.

How to enable 3D Touch on older iOS devices