Share
Facebook
Twitter
Pinterest
WhatsApp
- Advertisement -
Seeker is a brand new cydia tweak by Ron Thakrar
(@ronthakrar) which is fully-featured extension of Apple’s native audio
‘scrubbing’ or ‘seeking’ implementation within the control-center and
lockscreen and integrates seamlessly into iOS. 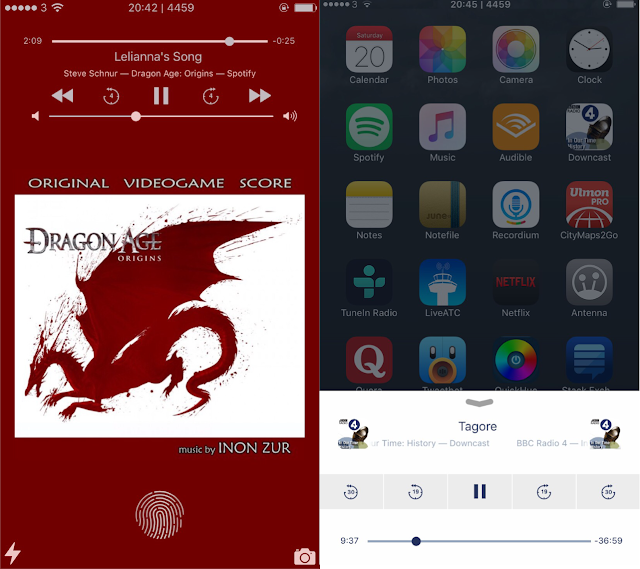 If you’ve ever missed a moment or simply just
wanted to be able to scrub your music – now you can scrub away and never miss
that moment again!
After installing this tweak you can options to configure from the settings app where you can enable or disable some features.
Note: Reboot is required after installation. 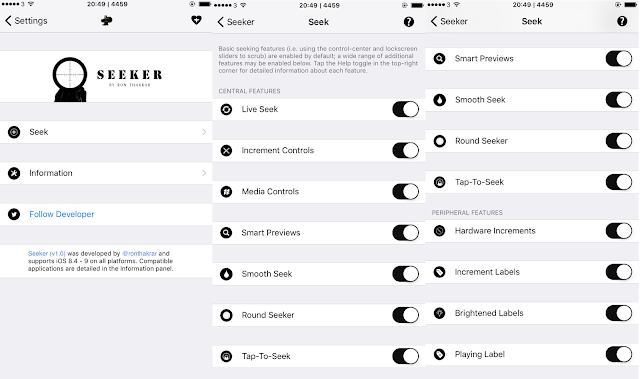 Seeker is highly customizable and offers different
features like:
Seeking – The sliders in the control-center and
lockscreen may now be used to alter track position (or in other words – to
scrub audio), for apps other than Apple’s stock Music app.
Live Seek – Updates the scrubbed time concurrently
with the movement of the slider. When Live Seek is disabled, the time will only
be scrubbed when the user finally lifts their finger from the slider – whereas
if Live Seek is enabled, the user will hear regular audio previews while the
slider is being moved.
Increment Controls – Seek forwards or backwards
discretely in small time intervals by tapping on podcast-style controls on
either side of the toggle playback button. The increment controls support
colorization through substrate extensions such as ColorFlow and CustomCover.
Media Controls – Seek forwards or backwards
continuously by pressing and holding the next-track/previous-track media
control buttons respectively.
Smart Previews – When scrubbing using the media
controls buttons with live seeking enabled, attempts to play the ‘live’ audio
previews slightly ahead of the final scrubbed time; such that the previews the
user hears will be closer to the location from which playback will resume when
the media controls buttons are released.
Smooth Seek – Smoothens the operation of the slider
by supplanting Apple’s ‘fine scrubbing’ implementation, i.e. enables high-speed
scrubbing all of the time.
Round Seeker – Replaces the default slider bar with
a round knob that is easier to grab and is more reminiscent of legacy iOS.
Tap-To-Seek – Simply tap anywhere along the slider
to scrub immediately to the tapped location.
Hardware Increments – Provides a system-wide
hardware shortcut for the same incremental-scrubbing functionality provided by
the Increment Controls option. Quickly double-tap the volume-up button to
increment forwards and vice versa using the volume-down button.
Increment Labels – Offers another shortcut to the
incremental-scrubbing type functionality by tapping on the elapsed-time and
time-remaining labels on either sides of the seeking slider.

Brightened Labels – Increases the visibility of the
media titles, playback times and volume controls on the lockscreen.
Playing Label – Simply appends the name of the
playing application to the now playing titles view.
Seeker supports the following apps.

Stock / Apple Apps
App Store / Third-Party Apps (latest
versions)
- Advertisement -
Seeker has also been developed from
the ground up to be fully compatible with several popular lockscreen and
switcher customization extensions on the Cydia store – including but not
limited to:
Seeker is available in Cydia via
BigBoss repo for $2.99 and is compatible with all iPhone, iPad and iPod touch
running iOS 8.4 or later. Seeker also works with several third-party apps
including Google Play, SoundCloud, Spotify and many more.
If you are not jailbroken yet, here’s How to jailbreak iOS 9.0.2 using Pangu?
What’s your view about Seeker? Let us
know in the comments
- Advertisement -