Facebook
Twitter
Pinterest
ReddIt
Auto-Correction
is great feature in iOS keyboard that automatically corrects your words when
typing but enabling Auto-Correction correct every words when you really don’t
want them to be corrected who might either love or hate it. Though auto
correction is nice time saver when it works well but it’s annoying and slows
down your typing when it doesn’t works well.
In iOS 10 Auto Correction feature
is always turned on by default. When you are typing in emails, messages to
respond quickly rather than English it automatically auto corrects the word
which you don’t mean to say so it may be a bit difficulty when typing. To fix
this issue, you have to make correction every time to continue typing your
message. Some may really like Auto-Correction when typing on their iPhones or
iPads running iOS 10 but some may not so you can disable and enable Auto
Correction feature at any time you want. To work well and communicate fast
disabling this feature may be the best for you. 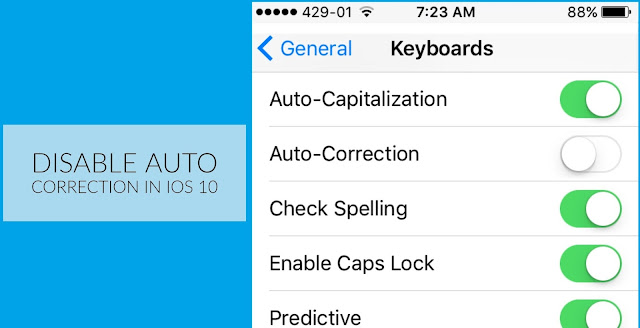