How to enable Cydia Substrate on the iOS 8.3 jailbreak(Fix) 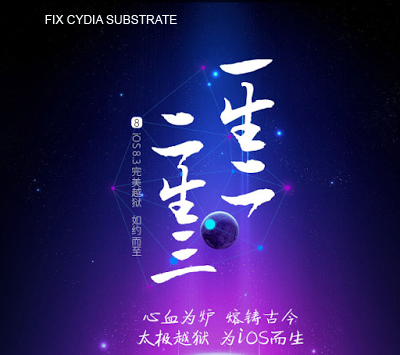 As Cydia Substrate was not compatible with
iOS 8.3 – iOS 8.1.3 in the earlier released of TaiG v2.0.0, so most of the
jailbreak apps and tweaks won’t work currently. But we had also expect saurik
to release a new version of Cydia Substrate that is compatible with iOS 8.3 –
iOS 8.1.3 and Saurik  releases Cydia
Installer 1.1.18 for jailbroken iOS devices also.
If you’re already
jailbroken on iOS 8.3 by TaiG v2.0.0, you’ve likely been frustrated by
the lack of

Cydia Substrate support up until now. Don’t worry the fix
is out, you can just use a simple .deb file
install to fix Cydia Substrate in just a few minutes.

Note: Your device is
already jailbroken with the TaiG 2.0 tool.
Step 1: Install iFile from Cydia
Step 2: Force close Cydia
Step 3: On your iOS 8.3
device, Open this page in Safari, Go to Download Page .
Step 4: Scroll down & Tap
the TaiG 8.3 Untether.deb download from your iDevice.
Step 5: After download
completes Tap open in iFile.
Step 6: Click on downloaded deb
file in iFile and Tap Install.
Step 7: Reboot your device
after the install completes
Now you can enjoy all of the compatible
jailbreak apps and tweaks that rely on Cydia Substrate!
But If you’ve yet to
jailbreak, then you can use the new TaiG 2.1.0(Updated) tool instead of
TaiG 2.0.0, you don’t need to do any thing like above. Here’s the tutorial How tojailbreak ios 8.3,8.2 & 8.1.3.
Let us know in the comment below.
JailBreakJailBreakTweaks
Share

How Do I Pair Apple Pencil With An iPad