Facetime is one of the most
important feature in Apple devices, but in some countries, Facetime
doesn’t support for some carriers.So this tweak helps you to enable Facetime on
unsupported devices. FaceTime is one of the shiny features that iOS users love
to use for communication. Sadly, FaceTime is not available in all countries.
Some countries have asked Apple to disable the FaceTime functionality to have
proper control of their residents.
FaceTime is one of the
appealing feature for a new iPhone or iPad user. As you already know, it allows
us to make video and audio calls from an iOS device to another iOS device.
Apple has expanded the reach of FaceTime from iOS to OS X devices. But Some
countries have blocked the service in their region to get privacy and more
control over the residents. We have seen countries from the Middle East region
has more strict rules than any other country.
With every new
release of iOS version, Apple appears to change things slightly in the core. In
iOS 8 for iPhone 5s, iPhone 6, and iPhone 6 Plus, Apple has changed the
FaceTime core settings, developers had to develop a new jailbreak tweak that
enables FaceTime an iPhone.
So to fix this
issues you will need to download a tweak called MEFaceTimeiOS8 that enables
FaceTime on iOS 8 and 9 running devices. 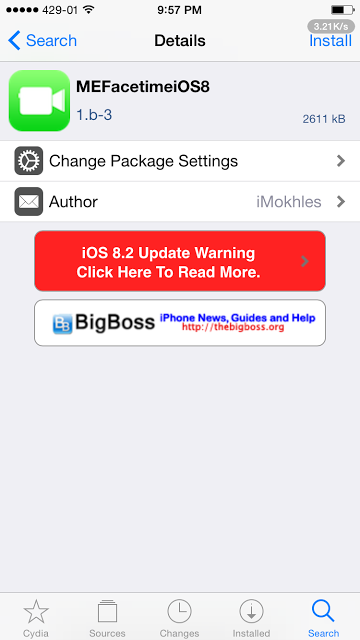 As mentioned above,
this tweak brings back the FaceTime functionality on your iOS 8 and 9 running device.
Therefore, you need to get a jailbroken device first to use this tweak. But If
you are yet to jailbreak iOS 8 and 9 on your iPhone, iPad, or iPod Touch, simply follow
our iOS 8 and 9 Jailbreak Guide here. 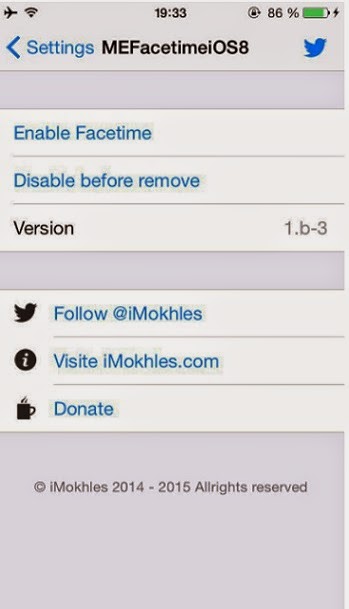 After that you will neeed to follow these
steps.
Step 1: Launch Cydia, and Install MEFacetimeiOS8 jailbreak
tweak on your iDevice.


Step 2: Tap on Settings app, and look out for MEFaceTimeiOS8 settings pane
to enable FaceTime services on your iDevice.


Step 3: Once you enabled the FaceTime from MEFaceTimeiOS8 settings
pane, just reboot your device and you’re good to go!

Now you can use FaceTime service on your
iDevice as everyone does. You can start with activating the FaceTime with your
number or Apple ID, and then start making video or audio calls to your friends.
Enjoy…..