How to fix Cydia crash and make iOS 10.1.1 Jailbreak Stable with YUCCA Utilities 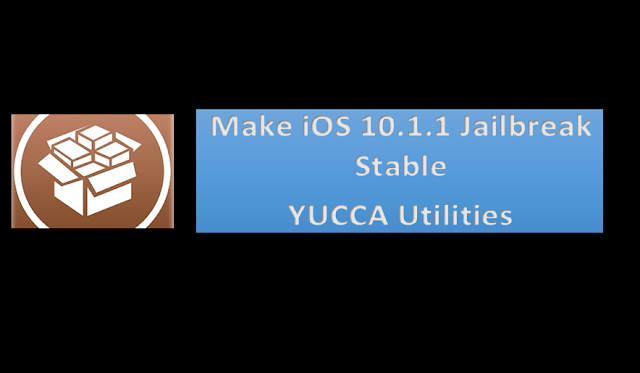 Luca has released
the iOS 10.1.1 jailbreak using Yalu match portal ipa and Cydia impactor on
latest iPhone 7 – 7 Plus, iPhone 6S-Plus, iPhone 6-Plus along with the iPad
Pro.  How to jailbreak iOS 10.1.1
using Yalu and Cydia Impactor. As this is semi tether jailbreak and
when jailbreaking iOS 10.1.1 Cydia Substrate might not work. To fix
Cydia Substrate, Ijapija releases a Substrate Fix (iOS 10). This is done by
adding repo called http://83.218.67.215/~ijapija00/cydia/.
Then Search for Substrate Fix (iOS 10) & Install this Package and
respring your device. When installing tweaks, Cydia crashes all
the time and by which your installed tweaks is not shown in preference settings
which is totally useless by jailbreaking iOS 10.1.1 and is not stable.

Nov 16, 2019
Prev Next 1 of 142
So to fix
Cydia crash and make iOS 10.1.1 Jailbreak Stable, Ijapija releases a YUCCA
Utilities which works perfectly on iOS 10.1.1 jailbreak and can install your favorite compatible cydia tweaks on your iDevices.

YUCCA
Utilities is a handy tool to make your jailbreak as stable as possible,
especially when .cydia_no_stash is enabled. This tool will stash your system,
and move around files (including /Applications). That way, you’ll be able to
install tweaks and apps without getting low space warnings. Even though system
files are risky to move around, this tool seems to be very stable and it’s well
tested, so you shouldn’t have issues. But as always, use everything at your own
risk!

After
installing this, Cydia will crash. This is all normal since this tool doesn’t
involve Cydia Substrate. After the crash, re-run Cydia and YUCCA should
automatically start to stash your device.
To install YUCCA Utilities, launch
Cydia, Refresh and search for YUCCA Utilities and install it and enjoy your favourite
cydia tweaks.
Note: If Cydia
crahes and can’t install YUCCA Utilities then launch match_portal ipa from the
homescreen and reprocess as above.

How to Enable and Fix Cydia Substrate on iOS 10.1.1 Jailbreak on iPhone/iPad

How to identify number of 32-bit apps installed in iOS 10.3