iOS 10.0.2  addresses an Lightning EarPods issue in iPhone 7 and iPhone 7
Plus, resolves an issue that caused Photos to quit for some users when turning
on iCloud Photo Library and also fixes an issue that prevented enabling some
app extensions. 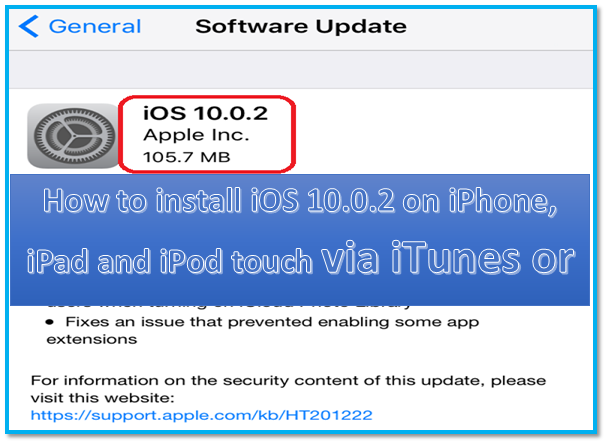 iOS 10.0.2 is
available via an over-the-air update or through iTunes for iPhone, iPad and
iPod touch. You can update by navigating to Settings app > General >
Software Update > Install or through iTunes by connecting your device
directly and manually.
It’s a really
simple and different method for installing iOS 10.0.2 firmware on iPhone, iPad
and iPod touch via iTunes and through OTA(Over The Air).
Install iOS 10.0.2 Via OTA:
Go to Settings
— General — Software Update and Hit download and Install. 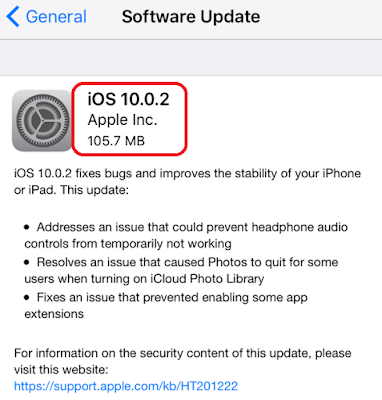 If your device
is jailbroken then the steps mentioned above does not apply. So you need to
install directly or manually from iTunes as follows;

Install iOS 10.0.2 Via iTunes
Direct Method:
Connect your
device to iTunes> Select your device> And hit restore if you want clean
iOS 10.0.2 or hit update if you want move from previous iOS version.
It will first
download the ipsw firmware file and it begins with the restore process. But
while doing this you need good internet connectivity. If you lose your internet
connectivity you cannot resume your download. So it’s better to restore or
update your device via iTunes manually.
Manual Method:
To install iOS 10.0.2 on your device, Simply Download
the .ipsw firmware file for your device from our download page — Open
iTunes — Go to Summary of your iPhone — Hit Shift key
and Click on Restore iPhone or Update iPhone.

After that select the downloaded .ipsw file and you’re done. The restoring
process takes a while so dont panic. After rebooting several times that your
device will be loaded with the latest iOS 10.0.2 software version.

Jailbreakers
should stay away from this update as it will lose your jailbreak and there is
still no jailbreak yet for iOS 10.0.2 and downgrading back to iOS 9.3.3 and
lower is impossible as Apple has stopped signing it.
Note: Backup
your device before performing this action