iMangoss
Home Apple News iOS 10.0.3 is released: Fixes Cellular Connectivity Issues With iPhone 7/7 Plus
Facebook
Twitter
Pinterest
ReddIt
Apple has released iOS 10.0.3 for the
iPhone 7/7 Plus which fixes cellular connectivity issues that have been faced
by many customers of Verizon and T-Mobile. iOS 10.0.3 fixes bugs including an issue where
some users could temporarily lose cellular connectivity.
iOS 10.0.3 is available via an
over-the-air update or through iTunes for iPhone, iPad and iPod touch. You can
update by navigating to Settings app > General > Software Update
> Install or through iTunes by connecting your device directly
and manually. You can download iOS 10.0.3 firmware from our download page if
you want to install manually from iTunes. 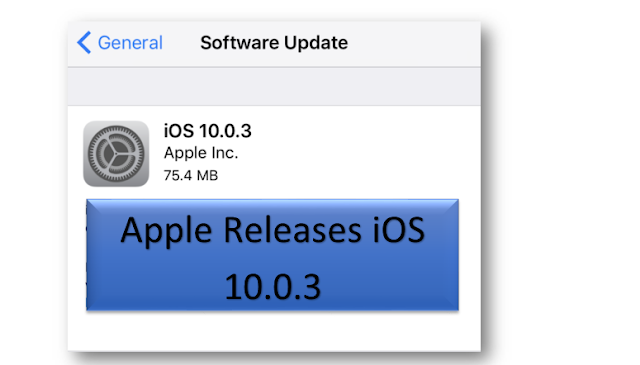 iOS 10.0.3 is compatible with iPhone 7, iPhone 7 Plus, iPhone 6s, iPhone 6s Plus, iPhone 6, iPhone 6 Plus, iPhone SE, iPhone 5s, iPhone 5c, iPhone 5, iPad Pro 12.9-inch, iPad Pro 9.7-inch, iPad Air 2,iPad Air, iPad 4th generation, iPad mini 4,iPad mini 3,iPad mini 2 & iPod touch 6th generation but the iPhone 4s, original iPad mini and iPad 2 are no longer supported.
Along with that iOS 10.1 is said to be
released in few next week as it is in beta stage which fixes on Notes, enables the new
‘Portrait’ depth of field camera mode for the iPhone 7 Plus and adds the ability
to enable the Reduce Motion feature while retaining the new
iMessage features
We will be
giving more information about this new beta if any features are
spotted. Till then Stay with us for more updates.
Stay updated and don’t forget to follows
us on Facebook, Twitter, Google+, or RSS.