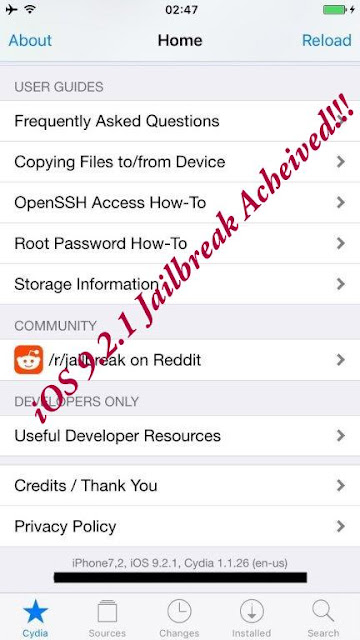 We all are
eagerly waiting for latest jailbreak for our device right? It’s been long that
jailbreak for latest firmware has not been released till now. The Pangu and
Taig team are working on iOS 9.2 jailbreaks. But there is another report that the
jailbreak for iOS 9.2.1 has been achieved! Isn’t it good news? A picture of
cydia running iOS 9.2.1 was posted by the well known hacker Todesco to his
twitter account.

Oct 25, 2019
Prev Next 1 of 227
He is the same guy who found security bugs in iOS 9.0.2 which
was later fixed in iOS 9.2.
Todesco also
mentioned that he will never release iOS 9.2.1 jailbreak for the public. But there
is a hope that he might release it because iOS 9.2.1 is still in beta version.
He might release it for all the people when Apple releases the final version of
iOS 9.2.1.

Why would anyone not release the jailbreak if he has really achieved
it? The hacker would be profited with millions if he is able to release the
jailbreak. Many people claimed that the picture shared by him tends to be fake
but Todesco knew that it was coming so he posted the picture of Kernel Dumbs
for iOS 9.2.1 as a proof.

So in my
opinion he will probably release the jailbreak when the final version of iOS
9.2.1 releases. If not, there are Pangu and Taig who are really working hard to
patch the iOS 9.2 jailbreak for the public.
Stick with
us for more news about Jailbreak, Cydia tweaks, Themes, Games and much other
cool stuff.
Will
Todesco release the iOS 9.2.1 Jailbreak for us??? Let us know your opinion in
the comment sections.
iOS9
Share

How to change Push Notifications Alert Style on iPhone and…