Share
Facebook
Twitter
Pinterest
WhatsApp
- Advertisement -
Apple has released the 7th beta iOS 9.3
to developers and public beta testers just after the release of iOS 9.3 beta 6 a
week ago which contains bug fix and improvements. This is a pre-release version of iOS 9.3
for iPhone, iPad, and iPod touch. Devices updated to iOS 9.3 cannot be restored
to earlier versions of iOS 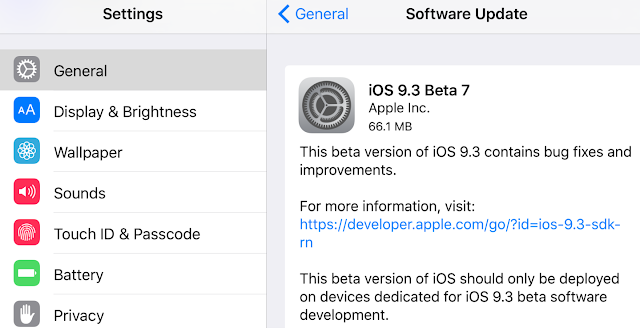 The update is available through
the Apple Developer Center or
via over-the-air (OTA) update on devices that are running the previous iOS
9.3 beta 6.
The iOS 9.3 beta 7 includes Night Shift mode just like the jailbreak tweak f.lux which
changes the color of the screen according to the light to match the eyes. Other
features include Touch ID in the Notes app which allows users to lock the
certain notes, more 3D Touch options, and also a new Carplay features.
The beta 7 includes some enhancement in
the Health app like you can now see more detailed information about your
workouts, Apple watch fitness data panels on the dashboard and app
recommendation for the Health app.
Other new features includes Wi-Fi
calling for Verizon iPhones, PDF from iCloud can now sync between iOS devices,
multiple Apple watch pairing option on a single iPhone, Music app enhancement
and other minor bugs fixes.
This may be the last beta for iOS 9.3.
We may finally see the final version of iOS 9.3 very soon at March event.
If you find anything new in iOS 9.3 beta 7 then please let us know..
- Advertisement -