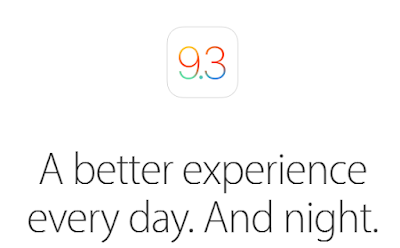 Apple has already released 7th beta of
iOS 9.3 for iOS developers. Previously final iOS used to be released after 4 or
5 beta testing but in 9.3, iOS betas are coming one after another.
So when will the final version of iOS
9.3 releases? Most people are curious about it. Well the good news is here. The
final version of iOS 9.3 will probably be released at a Apple event that is
going to be held on March 21. Apple usually showcase its iOS features on a
March Apple event. So we can assume that the final version of iOS 9.3 is near.
iOS 9.3 consists tons of features on it.
One of the major features is Night Shift Mode where the color temperature of the
screen changes automatically so that it is easier to see the device’s screen on
any conditions. Other features include Touch ID in Notes app, enhancement in
health app, Carplay receives an Apple Music Support, classroom app, Wi-Fi
calling on Verizon networks and many more.
Apple has also planned to unveil 4-inch
iPhone SE at an Apple event on March 21. Let’s see what new things Apple will
show us on that day.
Stick with us for more news and rumors.
Also See:
How to enable iOS 9.3’s Night Shift mode on older iOS version

How to install iOS 9.3 beta 7 without a Developer Account