Facebook
Twitter
Pinterest
ReddIt
Apple released the two new generation iPhone 7 and iPhone 7 Plus a
month ago along with new variant color JET BLACK and MATTE BLACK but there is a
different story behind it with these two iPhone models which Apple hides. The
new iPhone 7 and iPhone 7 Plus comes in two version of Modems Qualcomm and an
Intel. Though all iPhones look the same, some iPhone 7-7 Plus use a Qualcomm
modem, while others have an Intel modem. So there is difference in performance
in these two versions of modems attached with iPhone 7 and 7 Plus.

It’s unclear why Apple is offering iPhones with two different speeds.
The company did not immediately respond to a request for comment. Some reports
have suggested that by shifting some of its modem business to
a Qualcomm (QCOM, Tech30) competitor, Apple gains leverage to extract better prices from
Qualcomm.

A new report from Cellular Insights found that the Qualcomm modem performed
30% better than Intel’s. The researchers only tested the iPhone 7 Plus, but the
two types of modems are also used in the iPhone 7. 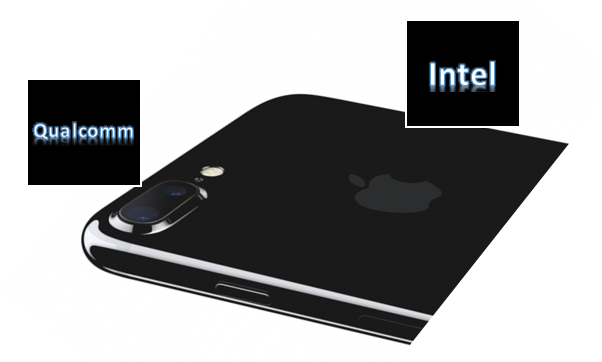 Are you feeling lag or slower while using your iPhone 7 – 7 Plus?
How to know which version of modems your iPhone 7 and iPhone 7 Plus
have?
If you have a Verizon (VZ, Tech30), Sprint (S) or SIM-free model, you’re safe and using the faster iPhone,
according to the Cellular Insights report. Another thing is the speedy Qualcomm
version is sold in the United States, China or Japan. And not every iPhone
purchased in the U.S. has the faster modem. iPhone 7 and iPhone 7 Plus from
T-Mobile, AT&T and Telstra include the Intel modem.
The Intel’s modem is in Model A1778 and Model A1784 while Model A1660,
A1661 is powered by Qualcomm’s modem. To determine if your iPhone has
the Intel/Qualcomm modem, check the model number, found in small print on the
back of your smartphone.
Which modem of iPhone 7 -7 Plus are you running? Please let us now in
the comments.
Via CNN Cellularinsights