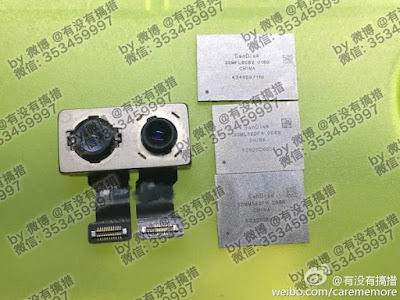 The upcoming
iPhone 7 is rumored to feature dual lens camera on the back to shoot more
beautiful photos. Now this leaked image confirms that one model of the iPhone 7
i.e. iPhone 7 Plus or Pro will feature a dual camera module.
The leaked parts
shared by Steve Hemmerstoffer on Twitter also show that the new iPhone 7 will
have a new storage option. The image shows three storage option; 16GB, 64GB and
the higher 256GB storage variant. Now the most notable thing is there is no
128GB option shown in the image. It could mean that Apple will be replacing
128GB option with the new higher 256GB storage variant.
Replacing
128GB for 256GB is pointless. Apple should focus on replacing the 16GB variant
completely and provide the storage option starting from 64GB, 128GB and the new
256GB. iPhone 7 with 16 GB storage will be useless because of its 4K video
recording capabilities and large sized app. 4 minutes of 4K video recording
almost takes the whole 16 GB memory on iPhone 6S.
Besides the
256 GB storage option, it is rumored that Apple will be introducing the higher
capacity battery for the iPhone 7 Plus.
Apple is
planning to unveil the new iPhone 7 on September this year. The design of the
phone is rumored to be more like iPhone 6S. The big selling points for iPhone 7
and iPhone 7 Plus could be because of its camera updates.
Would you buy
the new iPhone 7/Plus if it has the same design as iPhone 6s? Or will you look
for major upgrades? Let us know what you think in the comments section.
Source: 9to5mac