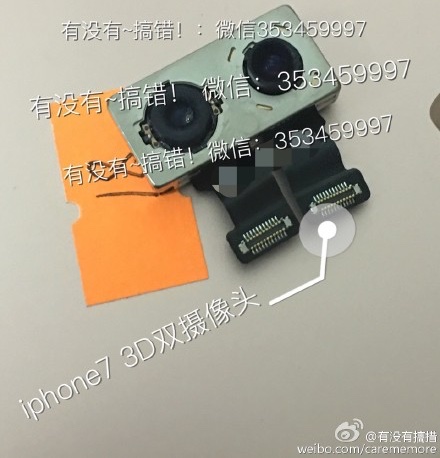 A new image depicts dual lens camera
that will be probably used by next iPhone 7 Plus.
Reports from Taiwanese website
Apple.club.tw posted an images of dual lens camera module for iPhone 7 Plus. Same
images were also shared by the Chinese site Chuansong.me and French website
Nowhereelse.fr.
Related Posts

Oct 25, 2019
Prev Next 1 of 227
Many of the readers said that image of
the dual lens camera module could be from another Smartphone but the lens is
labeled as “821” part number which Apple has already used in the past as noted
by Macrumors.
Apple has been testing the dual lens
camera module from various manufacturers so this may be one of the real camera
lens used by the Apple.

Apple will be releasing two variants, 4.7-inch and 5.5-inch iPhones this year
and the dual lens camera is likely to be available only in 5.5 inch display iPhone 7
Plus as per rumor.

Dual lens camera from Apple is said to
capture more detailed photos under low light conditions with more zoom
capabilities. The new iPhone 7 and iPhone 7 Plus will be launched in September
this year.
Source: Macrumors
iPhone7
Share