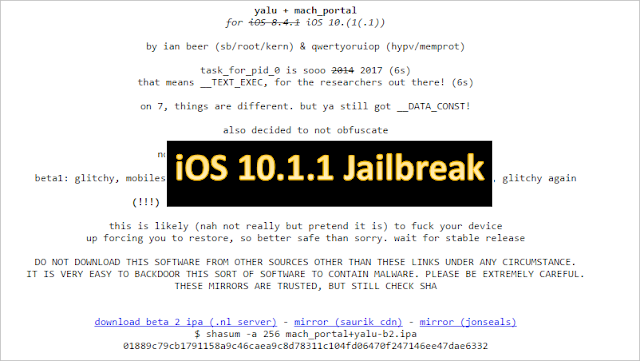 As promised, well-known
hacker Luca Todesco has released a beta jailbreak for iOS 10.1.1 and iOs 10.1. Please
note that it is currently only for jailbreak developers. The first iOS 10.1.1 beta
jailbreak currently supports iPhone 7, iPhone 7 Plus, iPhone 6s, iPhone 6s
Plus, 9.7-inch iPad Pro and 12.9-inch iPad Pro running iOS 10.1.1 and to add
support for other 64-bit iOS 10.1.1 compatible devices later. This is the
the first jailbreak to be released for iOS 10.x.x. The ‘yalu’ jailbreak builds
on work done by Ian Beer.
iOS 10.1.1 Jailbreak is very
unstable and this release is not for the general public at the moment. Luca
says users should wait for stable release of iOS 10.1.1 jailbreak because
trying this may end up losing iOS 10.1.1 or iOS 10.1 and you may force to
upgrade to iOS 10.2.
So if you’re a jailbreak
developer, then you can try the iOS 10.1.1 jailbreak by visiting https://yalu.qwertyoruiop.com/.

up forcing you to restore,
so better safe than sorry. wait for stable release
DO NOT DOWNLOAD THIS
SOFTWARE FROM OTHER SOURCES OTHER THAN THESE LINKS UNDER ANY CIRCUMSTANCE.
IT IS VERY EASY TO BACKDOOR
THIS SORT OF SOFTWARE TO CONTAIN MALWARE. PLEASE BE EXTREMELY CAREFUL.
THESE MIRRORS ARE TRUSTED,
BUT STILL CHECK SHA
download
beta 1 ipa (.nl server) – mirror
(saurik cdn) – mirror (jonseals)
Todesco has also revealed
that the jailbreak is not an untethered jailbreak, which means that you will
need to re-jailbreak your iPhone, iPad or iPod touch if you reboot it or power
off.
So we strongly recommend not
to jailbreak and stay away for now.
Read More
Related Posts

How to send secret message on Facebook Messenger on iPhone

How to Set your Favorite Song as Ringtone on iPhone 7,…