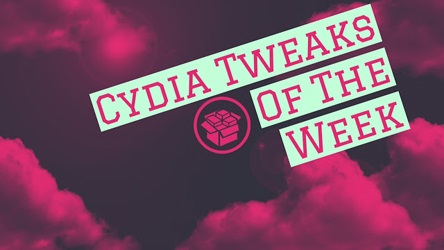 What’s up guys! Now it’s time to look up the new released compatible cydia tweaks of the week for iPhone/iPad which you might missed in this week. When new tweaks are released in cydia, we’re so excited to install it but due to lack of time management we don’t get a chance to look at Cydia.
Every tweak brings some new features for customizing our iDevices. There are number of tweaks that are released every day. But trying all of them is time consuming or some don’t work properly which may result in creating problem to your device.

So here we come up with new released compatible cydia tweaks of the week for iPhone, iPad, and iPod Touch. These all tweaks are just tested & work fine and are available in Cydia via BigBoss & ModMyi Repo.

CCRecord is a cydia tweak which allows users to record their
device’s entire screen with audio directly from the Control Center. (Free) See review

Cream 2 is a fantastic jailbroken cydia tweak by @cpdigdarkroom which lets you
customized the color of ControlCenter toggles the way you like as well as the
glyph color of AirDrop, AirPlay and Night Shift buttons. (Free) See review

Disclose (iOS 10) is a cydia tweak lets you swipe to close define view  on dictionary. (Free)

ForceInPicture is a cydia tweak that programmaticlly enable picture in picture feature on unsupported devices. (Free)

CustomCarrier (iOs 10)  is a cydia tweak that allows you to rename a costume carrier on status bar. (Free)

Creamless is a cydia tweak that removes the iOS 10 toggle coloring. (Free)

VKPass is a cydia tweak that protects your VK with passcode and Touch ID. (Free)

If your device has not yet jailbroken then follow this simple steps on How to Jailbreak iOS 10.1.1 Using Yalu app and Cydia Impactor [Windows]

How to identify number of 32-bit apps installed in iOS 10.3