Facebook
Twitter
Pinterest
ReddIt
What’s up guys! Now it’s time to look up
the new released iOS 9.3.3 – 9.0 compatible cydia tweaks of the week which you
might missed in this week. When new tweaks are released in cydia, we’re so
excited to install it but due to lack of time management we don’t get
a chance to look at Cydia.
Every tweak brings some new features for
customizing our iDevices. There are number of tweaks that are released every
day. But trying all of them is time consuming or some don’t work properly which
may result in creating problem to your device. 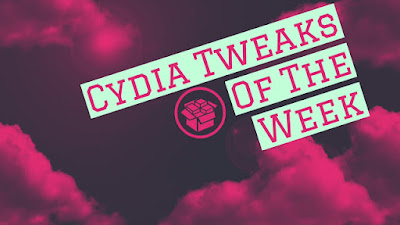 So here we come up with new released iOS
9.3.3 – 9.0 compatible cydia tweaks of the week like EmojiSuggest, WiJoin, PasswordRecovery
and more for iPhone, iPad, and iPod Touch. These all tweaks are just tested
& work fine and are available in Cydia via BigBoss & ModMyi Repo. Take
a look what’s new in Cydia this week.
EmojiSuggest is a cydia tweak that adds
emojis to the prediction bar of the keyboard like in iOS 10. (Free)
NCDarkClear is a cydia tweak that gives
you the visual option to make dark or clear the titles of the notification
center. (Free)
WiJoin is a cydia tweak that displays
the Wi-Fi network you are connected to like in Android. (Free)
PasswordRecovery is a cydia tweak which
helps you to recover your forgetton password. ($1.50)
RiftBoard is the easiest way to use all
of your homescreen icons inside any app. Quickly switch between your apps while
still being able to use them or see in the background. ($1.99)
NCTextColor is a cydia tweak that helps
you to customize your notification center. (Free)
RoundedSwitchr is cydia tweak that
rounds the multitasking cards views. (Free)
If your device has not yet jailbroken
then follow this simple steps on How to Jailbreak iOS 9.2- 9.3.3 Using English version
of Pangu app and Cydia Impactor [Windows]
Good news for iOS 10 user, well-known
iOS hacker Luca Todesco has already shown the possibility of iOS 10 on iPhone
7. So there is a chance for jailbreak to come soon. So stay update with us.
Also See:
iPhone 7/7 Plus animated Live Wallpaper on iPhone
6S/6S Plus
Top 50 Compatible Cydia tweaks
for iOS 9
Enable 3D Touch on older iOS 9
Devices
iOS 9.3.3
Compatible Anemone-Winterboard themes
Enable Live Photos on older iOS
9 devices