Facebook
Twitter
Pinterest
ReddIt
Apple’s iPhone
7 is yet to launch and don’t know which color option Apple is going to add this
year but an another rumor from Japanese blog Mac Otakara shows an image
showing the color option of different SIM card trays for the upcoming iPhone 7
and iPhone 7 Plus including a new glossy black color which is quite nice. 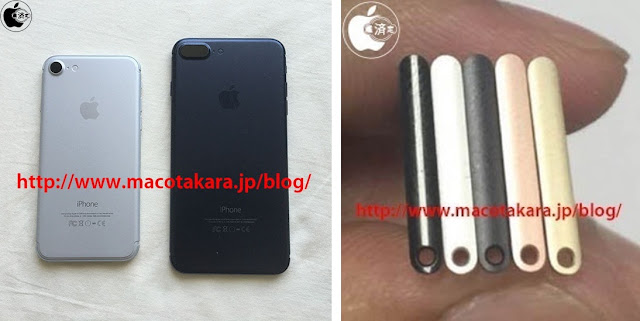 As in the
picture, Mac Otakara thinks the iPhone 7 and iPhone 7 Plus will come in five colorways
as Silver, Gold, Rose Gold, Space Gray and Glossy Black which will
feature smart connector, simplified antenna bands, dual lens camera, no headphone jack, and a dual speaker for stereo audio whereas
iPhone 7 Plus is expected to get a dual lens camera, 3GB of RAM,
Smart Connector. and other many predictions as water proofing, a new space black color instead of space grey,
and a Force Touch Home button with haptic
feedback.. Along with that Apple may finally ditch 16GB entry model and move up
to a 32GB model as well and it’s probably come in 256GB option as well.
Apple will be holding a iPhone 7 event on September 7 at
10am PT at the Bill Graham Civic Auditorium in San Francisco which is widely expected
to unveil the next generation iPhone 7 & iPhone 7 Plus,
updated Apple Watches and possibly a new MacBook Pro.
Source: Mac Otakara