Facebook
Twitter
Pinterest
ReddIt
Saurik has
released an update for the Cydia Impactor un-jailbreaking tool
which has been renamed as Cydia Eraser with a new icon that lets you remove a
jailbreak from iPhone/iPad.
Cydia Impactor
tool was originally created for iOS 8 and it supports the firmware up to iOS
8.4 which actually allows you to remove a jajilbreak from your device to
factory settings that is you did not need to restore and update via iTunes. 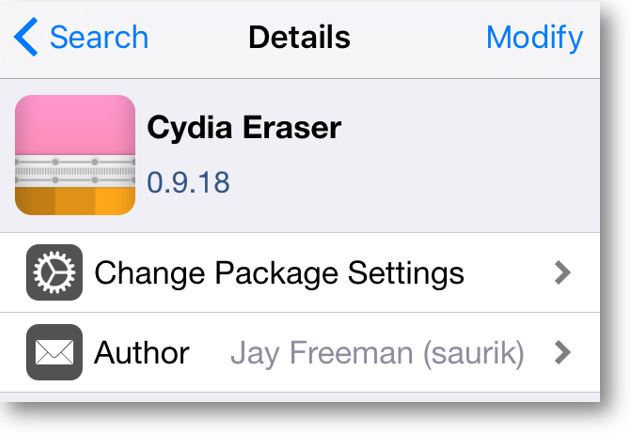 Now for iOS 9
support, Saurik updates Cydia Impactor as Cydia Eraser with a new name and new
icon that lets you remove a jailbreak from iPhone/iPad.
Cydia Eraser
is a tool which has only one feature: to remove and revert all changes
made to the device and return it to “stock” Apple iOS software without
updating to a new version of iOS.

Originally,
Cydia Eraser was released under the name Cydia Impactor, as “unjailbreak
device” was slated to be a feature of the full tool, and the mobile
implementation was built from the same codebase. However, I never finished this
feature for the full version of Impactor.

To get Cydia
Eraser you need to jailbreak your device. If your device has not yet jailbroken
then here’s How to Jailbreak iOS 9.2 – 9.3.3 on iPhone/iPad using
Safari [No Computer Needed]
How to jailbreak iOS 9.2-9.3.3 on iPhone or iPad using
Pangu [Windows]
Via Saurik Reddit
Stay updated
and don’t forget to follow us on Facebook, Twitter, Google+, or RSS.
Also See:
List of Cydia Tweaks Compatible with iOS 9.2-9.3.3
Jailbreak