Facebook
Twitter
Pinterest
ReddIt
Saurik has released
an update for the Cydia Eraser tool which supports for iOS 9.3.3 for iPhone and iPad. Cydia Eraser lets you un-jailbreak or remove iOS 9.3.3 to clean
state whether it was jailbreaked with the Pangu jailbreak tool in Chinese version, via Safari web browser, or with the English Pangu jailbreak
tool . 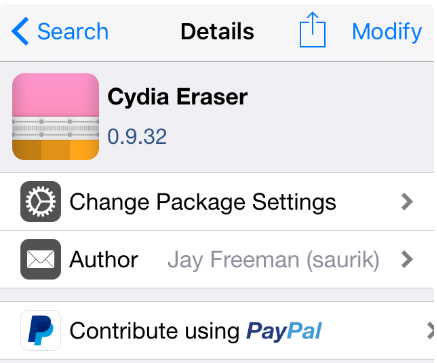 So if you are facing any issue on iOS 9.3.3 and you have already
jailbroken then you can use Cydia eraser to remove your jailbreak and restore to
the clean non-jailbroken state without upgrading your iOS version to the latest
firmware and can jailbreak at any time you like.
Cydia Eraser is same as the
previous Cydia Impactor. Since iOS 9.3.3 is still being signed by Apple, you
can restore it to the current iOS 9.3.3 version by manually restoring it from
iTunes because once Apple stops signing iOS 9.3.3, you cannot restore or
downgrade back to it, so its better to use Cydia Eraser to remove the
jailbreak from your device anytime.
Cydia Eraser
is a tool which has only one feature: to remove and revert all changes
made to the device and return it to “stock” Apple iOS
software without updating to a new version of iOS.
Originally,
Cydia Eraser was released under the name Cydia Impactor, as “unjailbreak
device” was slated to be a feature of the full tool, and the mobile
implementation was built from the same codebase.