Facebook
Twitter
Pinterest
ReddIt
This week
Apple Store has highlighted $4.99 TextGrabber +
Translator app as ‘Free App of the Week’ on App Store. That means
you can download and enjoy this $4.99 worth app at no charge
this week. If you miss to download it now, you will be charged as a regular
price of $4.99. So hurry up and grab this game without having to pay a penny.
This is valid till next Thursday. Once you download this app, you can use
it forever for free. 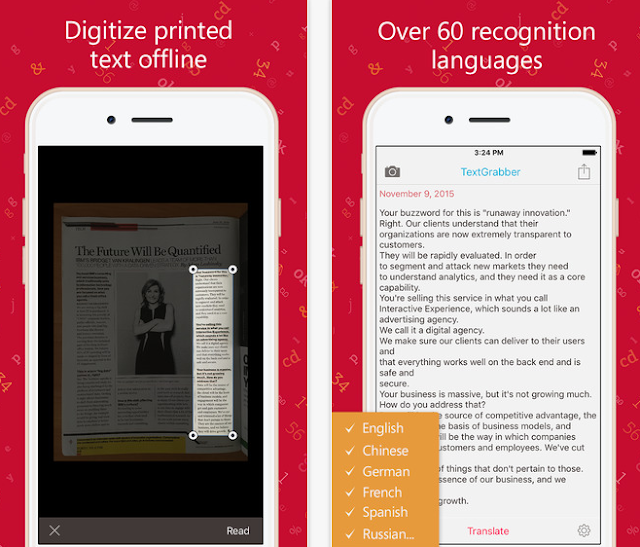 TextGrabber + Translator is
a app that easily and quickly scans, translates and saves your chosen text or
QR-codes from virtually any printed material.
Simply take a picture of the text on 60+ languages or QR-codes and immediately
edit, hear it spoken aloud via VoiceOver, translate it into 90+ languages, send
your text by SMS or e-mail, or share it quickly on Facebook, Twitter or
Evernote.
Translation is available as a separate in-app purchase.
From the App Store Editors’ Notes:
“Capturing
printed words and magically morphing them into easy-to-edit digital text is
TextGrabber’s bread and butter. But we love it nearly as much for the sci-fi
cool factor of being able to instantly translate Italian restaurant menus,
French Salon magazines, and Japanese graphic novels into our native language.”


Text Grabber + Translator is the Winner of SUPERSTAR Award in the “Mobile
Productivity App”, “Mobile Image Capture App” and “Text Input”
categories in Mobile Star Awards
Textgrabber is probably the best app which adds another function to your
iPhone: a scanner which is really fast and a must have app for students.
TextGrabber + Translator is the best way to digitize, save and translate any
printed information.
KEY FEATURES:
This app is
designed for both iPhone and iPad and is compatible with iOS 8.0 or later.
TextGrabber +
Translator is available in the App Store for free for a limited time.