Top reasons to Jailbreak your iPhone/iPad and iPod touch

What are the top reasons to Jailbreak your iPhone/iPad and iPod touch? Well we are here to show you guys what Jailbreak really is? How it works? What are the benefits of it? Do I really need to jailbreak? We are here to help you and try to give you the better idea for all your questions.

So what is Jailbreak? Why you need to jailbreak your iPhone, what is the top reason behind it? Just imagine what would you have done if you break the prison and come out of it? You’d be free right? I think you got the idea. So Jailbreak is also the same thing. You’d be free from the restriction that Apple has put on the iOS where we can’t change any of its source.

You would be able to highly customize your iOS device when you Jailbreak. Without Jailbreak, your iphone is just a toy. Android phones already have an open source so it can be highly customizable. But in the case of apple, it doesn’t allow you to play with the sources and codes. But you can do every possible thing with jailbreak. It allows you to customize your iOS devices, inject new features and make you iOS device like no other.
- Advertisement -

So should you Jailbreak? If you like to get other cool features on iOS device then definitely yes! It is 100% safe & secure. You won’t cause any damages even if you fail while jailbreaking. Gone are the days when Jailbreaking were really hard. There were so many procedures that were really hard to follow. But now, you can jailbreak your iOS device with top reason with just a click of a button.

I have put some comparision between Jailbroken and non-jailbroken iPhones where you
can get the clear idea from these sources. So let’s get started with the top reasons to jailbreak your iPhone or iPad.
(Remember on the left hand side the phone has no jailbreak and on the right hand side the
phone is jailbroken)
Transfer files to another phone Via bluetooth(AirBlue Sharing)
Almost everyone is unsatisfied because iPhones doesnot allow you to transfer files to
other phones by bluetooth. But it is possible to send files when you are jailbroken. 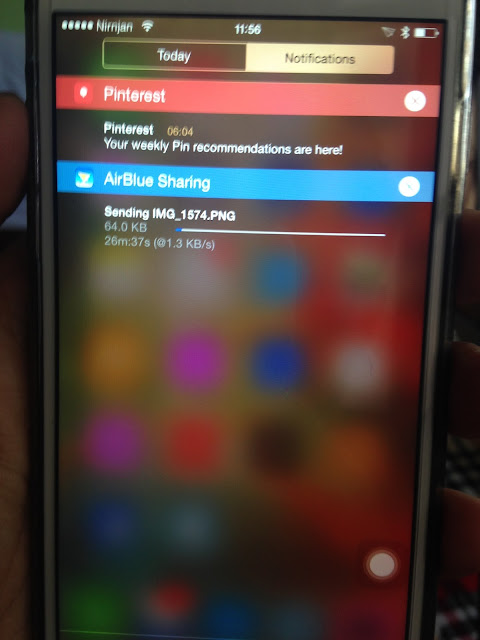 Get paid apps and games for free(LinkStore/KStore)

Who wants to waste money on apps and games when you can download it for free! As you can see on the right hand side there is a price tag of 6.99$ but when your’re jailbroken you can get it for free by simply tapping on get with linkstore. 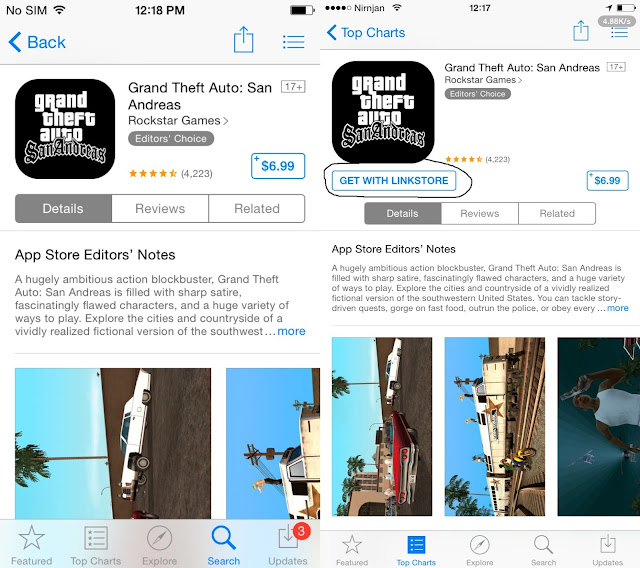 Change the look of your clock, CC, NC, Dock, Transition, Animations, StatusBar and many more…(Springtomize3)

As you can see the non jailbroken iphone has the old style clock from its birth. But the clock on the right side is so beautiful. It has a minimalistic look and feel. It gives
you a great feel everytime you unlock you phone 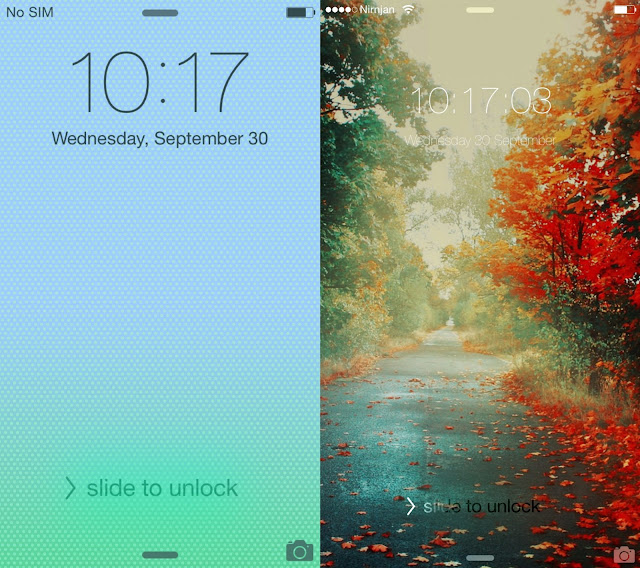 Change the look of your lockscreen(Epicentre/Lock+)

It has been 9 years since you have seen the same old lockscreen on the iphones. but with
jailbreak you can customize the lockscreen of your choice. 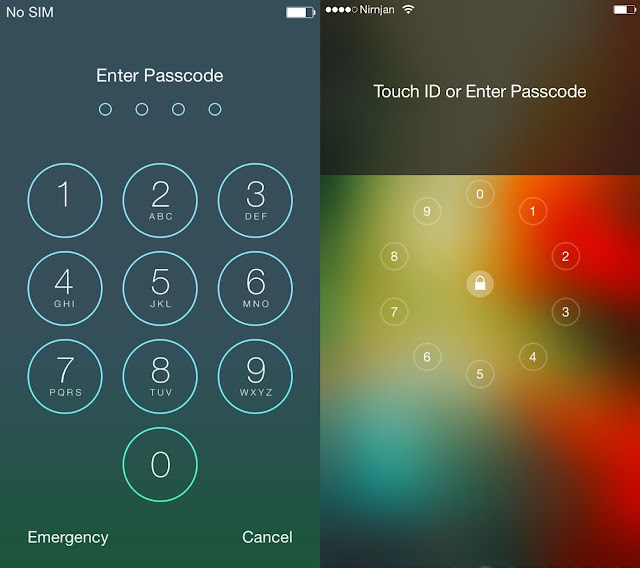 You cannot change theme of your iphone by default. As you can see the jailbroken iphone
has a elegent theme which is so beautiful. Thousand of themes are available to download in cydia where you can pickup your favorite. 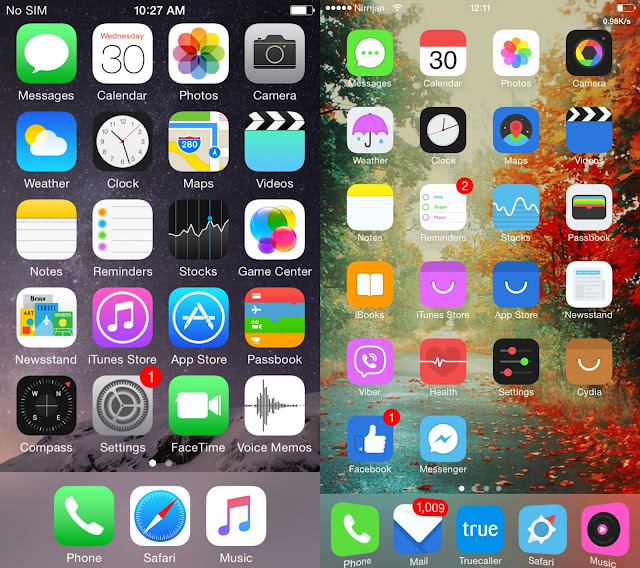 Jailbroken iphones allow you to perform various gesture to open various actions. For
example if your are in any app or game and you want to call someone, for this first you need to close the app, open your phonebook and make a call which is very inconvenient. But as you can see on the right hand side, you can call anyone just by long tapping on the status bar and make a call even you are in any kind of app or game. You can make a call even by using the app or playing game. 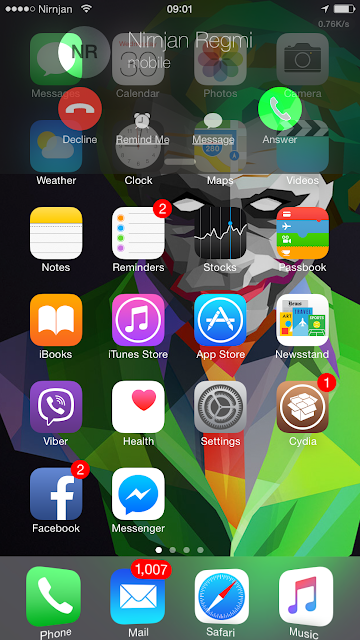 Protect your apps and games(BioProtect)

It is annoying when someone takes your phone and start to peek at your photos library. Jailbreak your iphone and you will be able to set passcode and lock your certain apps. You can also protect your items by fingerprint scanner with the devices which have Touch ID. 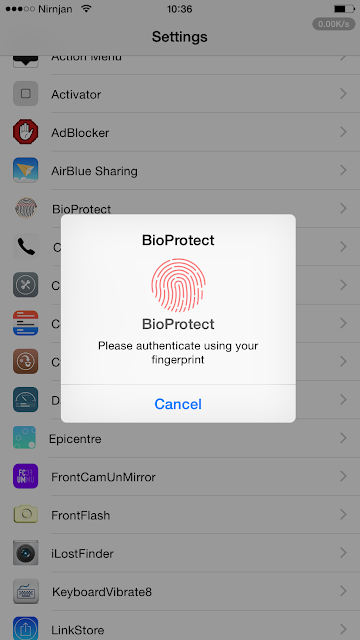 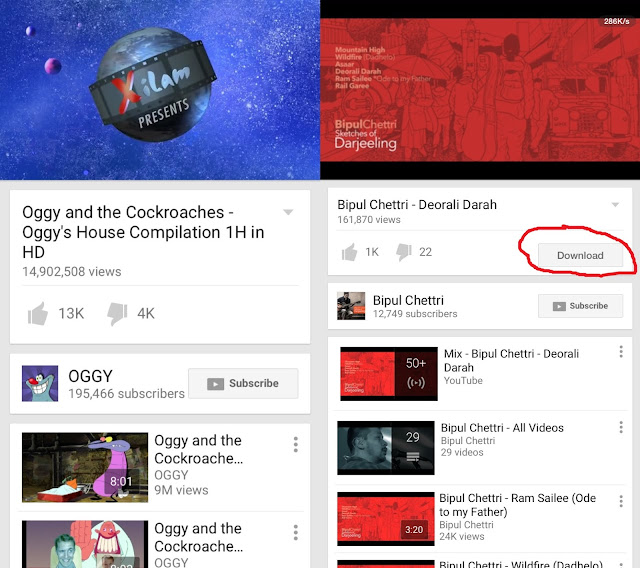 Add many toggles in control centre(CCSettings)

By default the control centre has only 5 toggles. But with jailbreak you can add many toggles as you want like you can enable data, location service, take screenshot, reboot
etc 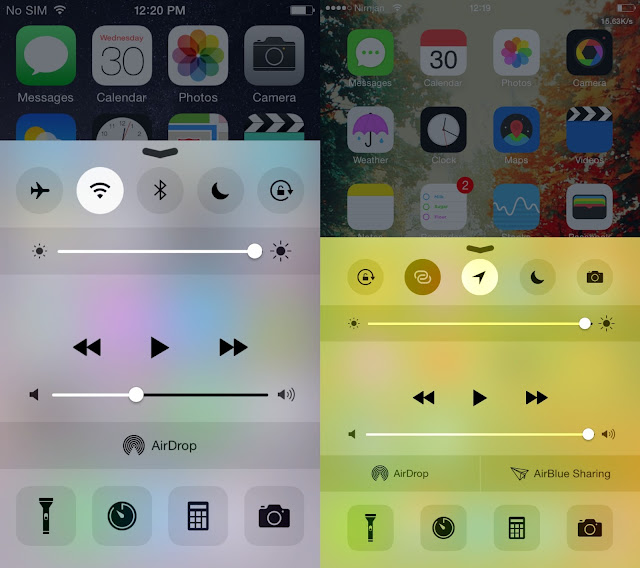 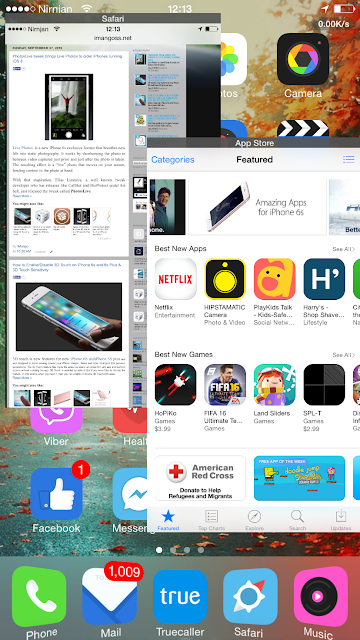 You can use two apps at once if you are jailbroken. By default apple doesn’t allow you to
do so but it is the power of jailbreak where you can modify anything.

iFile offers a complete file manager and viewer for the iPhone 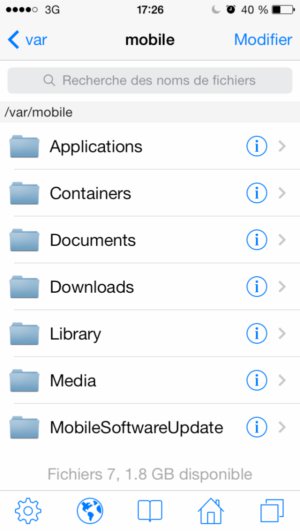 It gives full access to the file system including system files. It also allows you to edit text files and property lists, install deb file and many more which can be quite
useful occasionally.

BytaFont 2 allows you change the system font on your jailbroken iPhone. It allows you to change the font in apps, Lock screen, and more.

Find the thief of your device easily(iLostFinder)

iOS device provide the functionality of Find my iPhone but it is not so much accurate. But when you’re jailbroken you can easily find the thief of your apple device with location and his photo.

As 3D Touch was introduced in the iPhone 6s and iPhone 6s Plus. But if you have an older devices below iPhone 6S that is jailbroken running iOS 9, then you can enjoy the 3D Touch feature by installing tweaks named RevealMenu.

Picture-in-Picture Mode on Any Device

With a jailbroken device and tweak name VidoPane is installed you can detach videos into a separate window while doing other important tasks, can be placed on any side of the screen same as Picture- in-Picture mode for iPad.

With Aeternum Cydia tweak you can make your iPhone’s, iPad’s HomeScreen same like Apple Watch.

Make your favourite song as your ringtone(UnLimTones)/(Easy Ringtone)

The checkra1n jailbreak has been updated with support for iOS 13.4 and iOS 13.4.1 with many bug fixes and new changes. Checkra1n is compatible...
Read more

The new checkra1n jailbreak has released an update to version 0.9.2 with no-substrate mode along with the bug fixes and improvements. This beta adds an...
Read more