Facebook
Twitter
Pinterest
ReddIt
During
campaign President-elect Donald Trump repeatedly said that Apple should
manufacture its own products in United States of America with “Made
in USA” Labels and give employments to American peoples rather than in China.
According to New York Times, Trump
has said the same thing directly to Apple CEO Tim Cook to start manufacturing Apple
products in the United States of America. Trump also promises that he would
create the tax incentives for Apple “Made in USA” for low costing because building
iPhones in U.S. would double the production costs as compare to China. 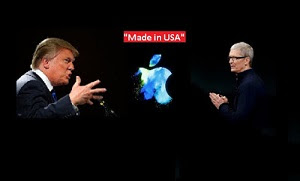 In an
interview with the New York Times, Trump said I got a call from Tim Cook at
Apple, and I said, ‘Tim, you know one of the things that will be a real
achievement for me is when I get Apple to build a big plant in the United
States, or many big plants in the United States, where instead of going to
China, and going to Vietnam, and going to the places that you go to, you’re
making your product right here.’
Cook
reportedly responded & said, ‘I understand that.’ I said: ‘I think we’ll
create the incentives for you, and I think you’re going to do it. We’re going
for a very large tax cut for corporations, which you’ll be happy about.’ Trump
continue to promise a large tax cut for corporations and less regulations so that
it may be easier for Apple to manufacture in USA.
Beside that
Japanese Nikkei reports that Key Apple assembler Hon Hai Precision Industry, also known as
Foxconn Technology Group, has been studying the possibility of moving iPhone
production to the U.S. with “Made in USA” labels.
Apple has already
asked contract manufacturers Foxconn and Pegatron to look into assembling
iPhones in the United States While Foxconn agreed but Pegatron declined to
formulate such a plan due to cost concerns.
So let’s see
what happens.. Let us know in the coments
Via 9to5mac