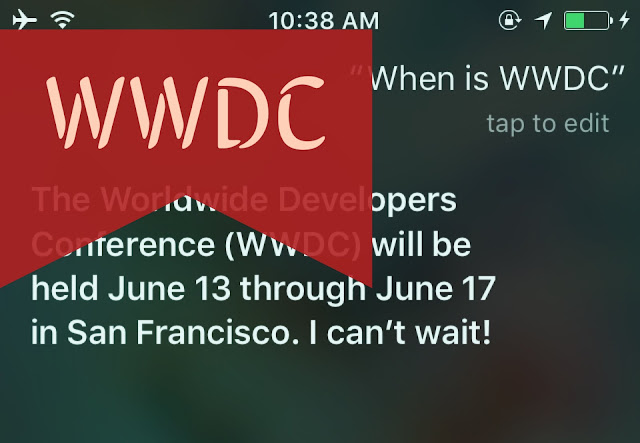 The event was not announced by Apple
itself but its personal assistant “Siri” did. If you ask Siri “When is WWDC”
she will answer “The Worldwide Developers Conference (WWDC) will be held June
13 through June 17 in San Francisco. I can’t wait! After some hours Apple also confirmed
this news through press conference.
The June event is expected to announce
the new iOS X, OS X 1.12 and more.
Also Apple has opened registrations for
its WWDC ticket lottery to its developers. The registration has been already
started and will end by April 22nd. If you are selected for the event than you
need to pay $1,599 to join WWDC.
WWDC Schedule

Sunday, June 12 at Bill Graham Civic Auditorium
Pick up your badge on Sunday before the week begins, or any time during the
week at the registration desk at Moscone West.
Kick off
Monday, June 13 at Bill Graham Civic Auditorium
Learn about the future of iOS, OS X, watchOS, and tvOS, then honor the
developers behind the year’s best apps.
Sessions
Tuesday–Friday, June 14–17 at Moscone West
Get the technical information you need to build the next generation of apps
using the latest Apple technologies.
Labs
Tuesday–Friday, June 14–17 at Moscone
West
Learn more about implementing new technologies with expert advice from Apple
engineers in a collaborative group setting.
Consultation
Tuesday–Friday, June 14–17 at Moscone
West
Make an appointment with Apple experts for personalone-on-one help on user
interface design, app distribution, marketing, analytics, and more.
Guest Speakers
Wednesday–Friday, June 15–17 at Moscone
West
Spend lunchtime getting inspired with talks by industry experts and luminaries.
Bash
Thursday, June 16 at Bill Graham Civic
Auditorium
Celebrate the week with new friends, great food and drinks, and exceptional music
at an outstanding concert venue.
You can also watch the event live on your iPhone, iPad, iPod Touch, Mac and Apple TV.
Source: Apple & 9to5mac